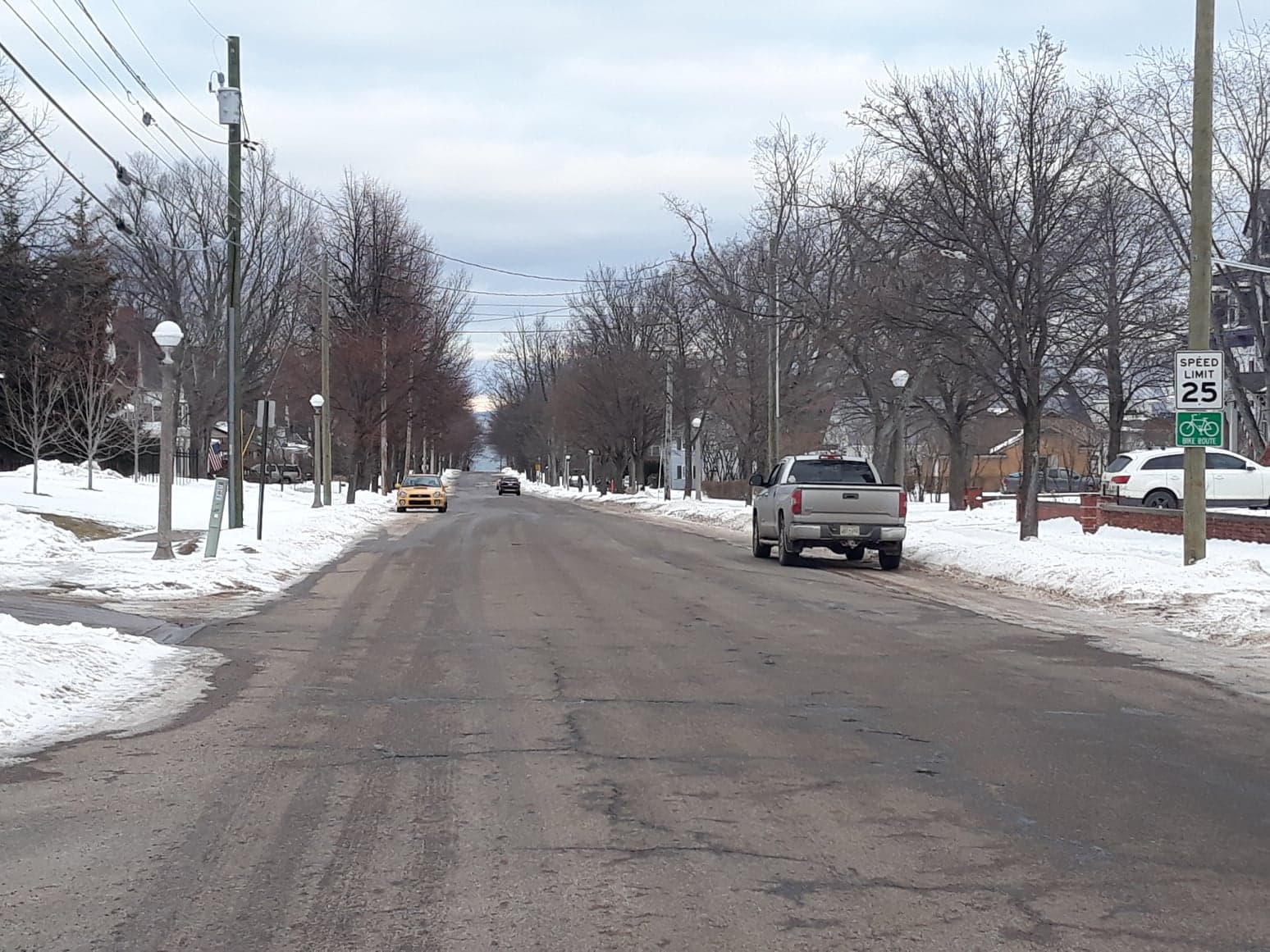 A: The housing affordability challenges faced by the City of Marquette are largely a result of two related problems:

1) Demand for both rental and owner-occupied housing in Marquette is outstripping the existing supply.  The housing vacancy rates (5.4% for rentals and 1.5% for owner-occupied homes) in the City of Marquette are quite low. (i) In other words, there are not many units on the market, and housing prices are being “bid up” as a result. (ii)

2) The types of housing units (again, both rental and owner-occupied units) that are actually available for rent or purchase are often not affordable for the City residents who are looking for housing. The few housing units that are available are often marketed toward more affluent households or have more floor area and amenities than most buyers or renters need or can afford.

For instance, the City zoning code currently requires a minimum of 2 off-street parking spaces to be provided for single-family homes and each dwelling unit in a duplex, and 1.5 parking spaces to be provided for each dwelling unit in a triplex or fourplex. (iii) Duplexes, triplexes, and fourplexes are usually occupied by renters, and for a variety of reasons renters are significantly less likely than homeowners to own multiple vehicles and are 6 times more likely than homeowners to not own a vehicle at all. (iv)

Consider the following example: A single-family house with an Accessory Dwelling Unit (ADU) in the backyard would require only 3 total off-street parking spaces. However, the same house would require 4 off-street parking spaces if it were converted into a duplex, even though both developments would produce 2 housing units and the single-family home with an ADU would include only one rental household, whereas the duplex would most likely include 2 rental households (who are less likely to own multiple vehicles than homeowners). Why does the City zoning code require more off-street parking for duplexes than for other types of Missing Middle Housing, like ADUs, triplexes, and fourplexes? Wouldn’t it be more logical and fair for duplexes to be treated the same as other Missing Middle Housing types that are predominantly occupied by renters? (v)

This might seem like splitting hairs, but because so many lots in the City are small or have odd dimensions, requiring even one additional parking space can make or break a potential Missing Middle Housing development, and can severely restrict the creation of more affordable Missing Middle rental housing in the City of Marquette. Excessive off-street parking requirements can also quickly start stacking up for larger housing developments, consuming valuable space, time, and money, driving up housing prices, and producing large parking lots that often have many empty spaces. According to the American Planning Assn., the cost of a single additional off-street parking space ranges from $5,000 to $35,000 depending on the type of parking provided. Those costs inevitably get passed on to buyers and renters, with parking minimums alone contributing to a 17% increase in housing prices, or $142 more per month on average. (vi)

And parking minimums are not just a problem from the standpoint of producing more affordable rentals – they can also make it harder for prospective homeowners to find a house that they can afford. Requiring 2 off-street parking spaces for all single-family homes regardless of the size of the home or the actual parking needs of the homeowners can make it impossible to build a modest house on a small lot, and (along with other obstacles in the Land Development Code) can essentially prohibit “cottage courts” and similar innovative models for producing smaller, more affordable single-family homes. In fact, MissingMiddleHousing.com, the Congress for the New Urbanism (CNU), and many other planning and housing experts and organizations recommend only 1 off-street parking space per unit for cottage courts. (vii, viii)

Q: What parking policy changes have been recommended by the Housing Committee?

The Initial Report that the Ad Hoc Housing Committee approved in January 2021 included two important recommendations related to parking. First, to address the challenges outlined above, the Committee recommended that the City amend our zoning code to “relax minimum parking requirements for multi-family developments where appropriate.” (ix)

In fact, the Planning Commission has already started working on updating the City’s parking requirements to better reflect actual minimum parking needs. In January 2021, the Planning Commission reduced the parking requirements for medium-sized apartment buildings from 1.5 spaces per unit to 1.125 spaces per unit, and for large apartment complexes with 20 or more units from 1.5 spaces per unit to just 1 space per unit. Parking requirements for subsidized low-income housing were also reduced to just 1 parking space per unit, and attached housing that is exclusively for seniors now requires only 1 parking space for every 2 units. Additionally, since 2019 the Mixed-Use and Central Business zoning districts have only required 1.125 spaces per dwelling unit for any residential buildings with less than 20 units. (x) These reductions in parking requirements for larger apartment buildings, senior housing, and low-income housing are a great first step, and similar changes to parking minimums for various types of Missing Middle Housing could have an even greater long-term impact on housing affordability and availability.

Second, the Committee identified the Marquette Brownfield Redevelopment Authority (MBRA) as a partner for the City as we try to increase housing affordability in Marquette. (xi) Providing adequate parking is often one of the most challenging and expensive components of housing development, and Brownfield Authorities in Michigan are able to use Tax Increment Financing (TIF) to reimburse housing developers for the cost of providing off-street parking, using the tax revenue generated by the Brownfield redevelopment project itself (NOT, as is often assumed, general fund revenue from taxes paid by other property owners in the City). In fact, the City has used Brownfield TIF in the past to subsidize parking for the high-end housing developments at Founders Landing – why not use the exact same Brownfield TIF mechanism to subsidize parking for more modest, affordable Missing Middle Housing developments elsewhere in Marquette? This would also align with the MBRA’s Project Priority Policy, which identifies development of “workforce housing” as a top priority for future Brownfield redevelopment projects.

Q: I heard that the Housing Committee wants to repeal the Winter Parking Ban? Is that true?

A: No, that is not true. Unfortunately, several weeks ago some baseless, sensationalized rumors about the Housing Committee got some attention on social media. The most pervasive of these false rumors was that the Ad Hoc Housing Committee was recommending that the City completely repeal the Winter Parking Ban to facilitate the legalization of triplexes and fourplexes in every neighborhood in the City. This is completely inaccurate and extremely misleading in several ways.

“The Committee also believes the Winter Parking ban should be re-evaluated and consideration given towards a policy that permits limited on-street parking. Such a policy change would allow a reduction in minimum parking requirements and may lead to increased maximization of housing unit development. This will require extensive consultation with the Dept. of Public Works, and on-street winter parking may not be universally applicable.” (xiii)

That is probably quite different from the sensationalized rumors you may have seen on social media. The Housing Committee was only recommending that the City look into the possibility of some kind of amendment to the Winter Parking Ban, and was not making any specific recommendation as to whether the Winter Parking Ban should be amended. The Initial Report also very clearly and carefully points out that these discussions, and certainly any actual policy changes, would “require extensive consultation with the Dept. of Public Works” and various other departments of the City government.

In fact, at its March 25 meeting, the Housing Committee took its own advice, and met for over an hour with the heads of several City government departments, including the Dept. of Public Works, the City Engineer, the Marquette Police Dept., the Marquette Fire Dept., the Community Development Dept., and the Downtown Development Authority. At that meeting, it became clear that while the Winter Parking Ban is not actually necessary to ensure emergency vehicle access during the winter, it does play an important role in allowing streets to be quickly and efficiently cleared of snow. The City Engineer also noted that collection of snow on the side of the road could potentially lead to more rapid degradation of the street surface and curb. Ultimately, most of the City department heads agreed that the logistical challenges of potential changes to the Winter Parking Ban would probably outweigh the potential benefits (more availability of on-street parking, making it easier for neighborhoods to support various types of Missing Middle Housing, etc.). (xiv)

Q: What else has the Housing Committee learned about the relationship between parking and housing since the Initial Report was released?

A: At its March 25 meeting, the Housing Committee also learned another important piece of information – according to the Marquette Police Dept., there is no significant variation in the frequency of Winter Parking Ban violations, unauthorized front yard parking, and other forms of illegal parking across different neighborhoods in Marquette. Some City residents have expressed concerns that amending the City zoning code to allow the creation of more Missing Middle Housing (ADUs, duplexes, etc.) will lead to increased parking issues in their neighborhoods. However, this information from the MPD does not support these claims. After all, if adding a few units of Missing Middle Housing to a particular neighborhood actually leads to significant parking problems in that neighborhood, we should expect there to be more parking violations in medium-density neighborhoods than in lower-density neighborhoods. However, according to the MPD, we do not see any such pattern in parking violation data in the City of Marquette. (xv)

If you have any questions, concerns, or ideas about parking policies in Marquette or any other aspect of the Housing Committee’s Initial Report, or if you have suggestions for the Final Report or any special knowledge or experience that you would like to share with the Housing Committee, please reach out to me at ebonsall@marquettemi.gov or (906) 236-0247. And don’t forget to check back here and on my Facebook page at www.facebook.com/evanbonsall4mqt for future housing-related blog posts!