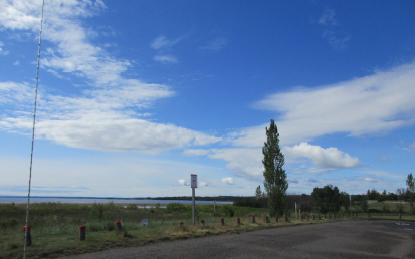 These are my vote explanations for the City Commission meetings on August 30 and September 13 – because the meeting on September 13 had only one business item that required a vote, I decided to post explanations of my votes at both meetings together, rather than make separate posts. I will make a separate vote explanation post as usual for the September 27 meeting, where we will be considering and voting on the FY 2022 City budget and several other important items. As usual, if you have any questions, please contact me at (906) 236-0247 or [email protected] You can watch the videos of both of these City Commission meetings at the City of Marquette YouTube channel.

This was a public hearing to consider the proposed rezoning of 301 W Baraga Ave., the St. Peter Cathedral property, from Medium Density Residential to Multi-Family Residential. The Catholic Diocese had filed this request for two reasons: 1) The property contains 11 apartments which are occasionally occupied by Catholic clergy members, which is a non-conforming land use that was not in compliance with our City zoning code, and 2) Catholic Social Services (CSS) wanted to develop a women’s recovery house on the property, which was not allowed in the Medium Density Residential zone but would have been allowed in the Multi-Family Residential zone, pending a separate public hearing and permitting process to allow the recovery house as a “Special Land Use.” There was significant opposition to this proposal from neighbors and parishioners. However, the City Commission was informed just before the hearing that the Church had decided to cancel their plans and look for other locations to develop a women’s recovery house, most likely outside the City of Marquette. As a result of this major last-minute change of plans by the Church, the Commission voted 5-2 to postpone the final vote on the rezoning request until the Sep. 13 meeting so we could have time to gather all the facts before making a decision – I voted in favor of postponing the vote, while Commissioners Mayer and Stonehouse cast the only two dissenting votes.

The City has been in negotiations with Ore Dock Brewing Co. for some time regarding the sale of a City-owned railroad right-of-way behind their bar/brewery on Spring Street, and tonight we were voting on whether to sell the property to the Ore Dock for $40,600. As you can see in the image above, this is a narrow strip of property without easy access from any street, and their plans to turn it into a beer garden were the first realistic redevelopment proposal for this vacant property that have been presented to the City in the many decades that we have owned the property. Fortunately, we came to an agreement on a fair price and voted to sell the property, which will provide another beautiful outdoor social space in downtown Marquette, and provide an opportunity for a successful and beloved local business to continue to grow and thrive. This was a common-sense Yes vote for me.

This was necessary to allow the new owners of the property mentioned above, Ore Dock Brewing Co., to redevelop this property into a beer garden, which is a commercial use. Another common-sense Yes vote.

This was a vote to rezone a 5-acre, 1,000-foot piece of City-owned public lakeshore across from the Presque Isle Power Plant as Conservation/Recreation. The property is essentially undeveloped but had previously been zoned Industrial/Manufacturing, as it was owned by WE Energies and part of the larger Presque Isle Power Plant property across the street until the City recently acquired it for free from WE Energies through a quit claim deed. This rezoning reflects the City Commission’s desire to permanently preserve this space for public use and conservation, and I hope that this property will eventually be incorporated into a larger Conservation/Recreation Easement and/or Lakeshore Park District which would guarantee that all City-owned lakeshore property east of Lakeshore Blvd. from Presque Isle to Picnic Rocks would be permanently preserved for public use and conservation. There seems to be considerable support for this concept from Mayor Smith and most other City Commissioners, so I’m optimistic that we can get this done within the next year.

This was a vote to consider a new contract with the City supervisors, which was negotiated between the City Manager’s office and the supervisors’ bargaining unit (the supervisors are unionized through AFSCME). This contract would have affected only 8 City employees, and would have provided 3% raises each year for 5 years, amounting to a total increase of $86,450 in additional wages over 5 years (i.e., an average pay increase of $2,160 per employee per year). Many of my colleagues expressed concern that this contract had been negotiated in June, before we knew of the true extent of the City’s steep budget shortfall for FY 2022, which represented about 20% of the entire City general fund from FY 2021. As a result of this fiscal uncertainty, several Commissioners expressed opposition to approving a 5-year contract, even if most of us did not disagree with the idea of a 3% annual raise (which is fairly modest by today’s standards and is not currently even keeping pace with inflation).

I understood these concerns, and this is one of those decisions where there really is no “right” answer. However, from my experience growing up in a household where both of my parents worked in local law enforcement, I know first-hand that many working-class City employees and their families often struggle to make ends meet financially, given the rapidly rising cost of living and contractual raises which are usually either nonexistent or fail to keep pace with inflation. I also did not necessarily agree with the argument that approving this small contract (which only affects 8 employees) would set a precedent for other upcoming union contracts that the City has to negotiate in the coming year, as we have approved multiple other contracts in the past year which affect far more employees which included zero contractual wage increases. We need to invest in our people just as much as we need to invest in City infrastructure and City services, because in the end, it is our City employees who provide those services and care for that infrastructure. I voted to approve the contract along with Commissioner Mayer, while the rest of the Commission voted No. This contract will now be renegotiated along with several other union contracts next fiscal year.

This is one of many small bits of “fat” that the City Commission is trimming from the City budget to put the City in the best possible financial position in FY 2022, given our current budget shortfall and the structural deficits we are seeing with many of our City infrastructure funds. Having a lobbyist representing the City in Lansing has been helpful at times, but ultimately I did not feel that we were getting enough value or communication from our lobbyist to justify retaining them. This action will save the City $36,000 each year, and in a year in which tough budgetary choices have to be made, I would much rather spend those taxpayer dollars on maintaining City parks, roads, and services.

Authorize the Mayor to Appoint a City Delegate to the MML Convention: YES (Passed 7-0)

This was a vote to allow the Mayor to appoint a City Commissioner to represent the City as our voting delegate at the annual Michigan Municipal League (MML) Convention in Grand Rapids later this month. Normally the entire Commission and the City Manager would also attend the MML Convention, but this year we have cut City travel funds from the budget due to the City’s current financial constraints. As a result, only Mayor Pro Tem Hill and Commissioner Davis will be attending at their own expense. Mayor Smith appointed Mayor Pro Tem Hill as the City of Marquette’s delegate.

*This rezoning request was initially tabled at the Aug. 30 meeting (see above).

Since the Aug. 30 public hearing on this rezoning request, the Catholic Diocese and Catholic Social Services had confirmed that they had cancelled their plans to develop a women’s recovery house in the 11-unit residence at St. Peter Cathedral, and did not intend to change any of the current land uses on the property – instead, they were merely seeking rezoning to Multi-Family Residential to allow them to continue their pre-existing non-conforming use of the property as a residence for visiting clergy members, and did not feel that the property was a good fit for other reuses that neighbors and parishioners had expressed concerns about, such as substance use treatment, rental housing, etc. Some neighbors were still opposed to the rezoning request – based on correspondence and public comments I received from constituents, some people still incorrectly believed that a women’s recovery house was being developed there, while others expressed concerns that at some point in the future the property could be redeveloped into rental housing or other facilities that they found to be undesirable.

I understood the concerns from neighbors, but I voted Yes on the rezoning request for several reasons: