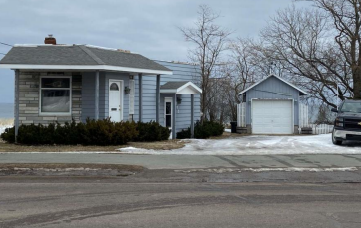 Here are my explanations of all of my votes on substantive, non-Consent Agenda items from the April 26, 2021 City Commission meeting. You can watch the meeting here: https://youtu.be/OATEnyHssrw?t=297

The City Commission voted to complete the purchase of 702 Lakeshore Blvd., a small parcel of land along the Lake Superior shoreline in east Marquette, for $350,000 from the Robert T. Anthony Trust. The Anthony family wanted to make the property available to the City before listing it on the market, and preliminary approval was given for this land purchase at the April 12, 2021 City Commission meeting. I voted Yes on April 12 and did so again on Monday night because I strongly support preserving our Lake Superior shoreline and keeping as much of it under public ownership as possible, and I felt that by making this investment the City Commission was following in the footsteps of previous City leaders who for decades always prioritized preserving Marquette’s public lakeshore for future generations. The City will not sell or develop this property, but will instead permanently preserve it for public use – we have also agreed to recognize the Anthony family in some form on this site, most likely through some sort of plaque or marker. If the City had not purchased this property, it would have sold to a private buyer for well over $350,000, and would likely have been developed into a high-end condo or short-term rental. Instead, it now belongs to the people of Marquette.

I voted to authorize the City Manager to negotiate the sale of an old City-owned railroad grade located at 213 South Front Street in downtown Marquette. The Ore Dock Brewing Company, which already has an ADA-accessible rear entry on this property, wants to purchase this small parcel of land to redevelop it into a public beer garden between Main Street and Spring Street. This very small, oddly shaped parcel has been owned by the City for many years and does not seem to have any other potential productive uses. I think this would be a great infill development project which would produce a fantastic new public space in the heart of downtown Marquette while also growing the City tax base and supporting a local small business. The property would be sold for a fair market price, and the sale will not be able to take place until the City Commission has approved a Purchase Agreement authorizing the sale. This Purchase Agreement will be reviewed and voted on at a future City Commission meeting. Also, just to clarify (because a couple people have asked): No, this is NOT the Rosewood Walkway – that is across the street and would not be affected by this proposed project.

This was a common-sense vote to add 470 feet of East Baraga Avenue (the small portion of Baraga that is east of Lakeshore Blvd.) to the City’s Local Street System. This will allow the City to receive approximately $400 in additional state Act 51 road funding each year.

I remember when this exciting project was first brought before the Parks & Recreation Advisory Board, back when I was still serving on that board prior to my election to the City Commission. Now, two years later, I’m thrilled to see that it is finally becoming a reality – the NTN and 906 Adventure Team are teaming up to build and maintain a new bicycle playground for local kids in Tourist Park. The designs are beautiful, and this will be a fantastic asset for the community which will not cost a single taxpayer dollar. I am so grateful to the NTN and 906 Adventure Team for the hard work and financial support they have invested into this project – this was a no-brainer, I voted Yes.

Start Process of Issuing up to $6.2 Million in Capital Improvement Bonds: YES (Passed 7-0)

This was definitely the most complicated issue at tonight’s meeting. Generally, the City only issues $5-6 million each year in Capital Improvement Bonds (i.e., debt) to fund various infrastructure projects throughout the City, because we are currently only able to pay off about $5-6 million in debt each year and it’s not good fiscal practice to increase the City’s overall debt to fund routine infrastructure projects. This year, City staff initially asked the City Commission to authorize up to $11 million in Capital Improvement Bonds to help fund Phase II of the Lakeshore Blvd. project (i.e., the coastal resiliency, habitat restoration, and erosion mitigation work that is arguably the most critical part of the project). This was much more than my colleagues and I were expecting, so City staff 1) found a way to reduce the our expenses for Lakeshore Blvd. Phase II to about $1 million this year, and 2) recommended cutting three projects from this year’s Capital Improvement Plan, including two major road/sewer upgrades on Shiras Drive and Newberry Street in south Marquette. This would have brought us down to a bond cap of $5.5 million.

However, I advocated for approving a slightly higher $6.2 million bond cap to allow the Shiras Drive and Newberry Street road improvements to still be completed this year – I did so because, while I strongly support the Lakeshore Blvd. project, I do not believe that it is fiscally responsible for fair to Marquette residents to fund it by taking funding away from badly needed routine road maintenance projects in the rest of the City. In fact, Shiras Drive is one of only two access points to Shiras Hills yet it is one of the worst roads in Marquette (rated a 2 out of 10 on the PASER scale), and Newberry Street is also in poor condition (3 out of 10 PASER rating) with some residents experiencing water and sewer issues. Also, $6.2 million is still roughly in line with the amount of debt we typically pay off each year, so I felt that this was a fiscally responsible proposal Capital Improvement Bond cap.

I thought that this was a sensible, principled compromise, and Commissioners Davis and Hanley expressed similar sentiments. The City Commission unanimously voted to authorize the City to begin the process of issuing this year’s Capital Improvement Bonds in an amount not to exceed $6.2 million, which is roughly in line with the amount of money we typically borrow each year. The actual bonds will not be issued until the City Commission gives our final approval in June.